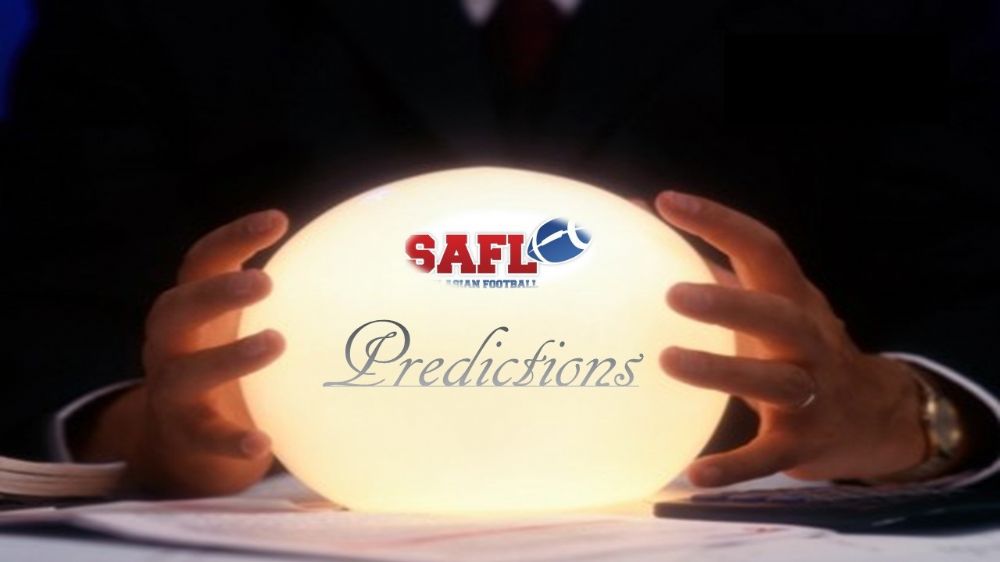 The Bandits almost pulled off a sweet victory over CK but a last second TD in OT gave CK the win. Jay has put together 2 good games in a row and we hope he can continue this into the playoffs. This team is much better than what they’ve shown during their losing streak. They nearly upset the Browns and nearly beat CK. If this team can learn to close out and enter the playoffs hot, they have the talent to go to the finals.

Primetime suffered arguably the biggest upset of the week. They lost to the Savages 20-14. This is a very bad loss for a good team. Hashim made an appearance at QB and lead his team to a much needed victory. Why did Primetime take this team for granted? They came out flat  and unprepared to play. They were missing some key players, but it’s no excuse for them to lose to the Savages. They’re 5-2 and only a game up on CK and the Browns. What looked like a certainty at the 3 position, is now looking more difficult. Can they hang on to that spot? They have another tough opponent in the Bandits.

This is a very important game for both teams. The winner of this game will likely stay put at their respective playoff spot. Neither team can afford to drop anymore in the standings. Jay is an up and down QB. He’s good at reading a zone, but struggles against athletic safeties. QB Marvin has been fantastic this year and is a strong rookie of the year candidate. He has to come out assertive and decisive against this good Bandits defense. Primetime will bounce back.

The Savages got a much needed win against a good Primetime team. Hashim’s return gave this team the boost they desperately needed. You can just see the Savages inspiration as they upset PT. The question is, can they keep this up. They need to win 1 out of the next 3 games just to avoid that 10th seed. Unfortunately, they’re playing the 2nd best team in the league that averages 37 ppg. Their defense has been the 3rd worst in the league. If they can play inspired, they may give the Gators a run for their money.

This team continues to steam roll opponents. Their point differential is the 2nd best in the league and they have the 2nd best defense in the league. They are a legitimate threat to the Browns and AK. It’s extremely impressive how they continue to win with their limited roster. They will play a jeckyl and hyde Savages team and look for them to take care of business early. They’ve practically locked up that 2nd seed unless AK loses their next games. This team will be a very tough out in the playoffs.

The key to this game is really Hashim. If the Savages can play the same way they played against Primetime, they’re a threat against anyone. The Gators are a team on a mission and they will not lose to the Savages.

The Browns defeated the Elites last week in a fairly close game. The Elites were able to score 32 points against the Browns. This is still very concerning. We can’t remember seeing the Browns defense giving up this many points consistently. They’re still the 4th worst defensive team and they’re not very far from being the 3rd worst. Are they really getting that old? TJ’s injury also hurts this team. We assume he’s done for the season. They were already thin on defense and this hurts them even more. Can they fix this defense in time for the playoffs?

CK has looked good all season. They compete in every game and have a great QB. They can move up and go as high as 3rd, or they can be as low as 6th. They really control their own destiny. We see them being right there at the 4 seed. It’s amazing how far this team has come from last year. They were a laughing stock and now they’re a solid playoff team. If this team stays healthy, they may win a playoff round or two in the playoffs.

CKs defense will be heavily tested against one of the league’s best offensive teams. If they can contain the Browns to fewer than 35 points, they may have a shot at beating this team. Yash is very good at reading the zone and finding the open man. The Browns are never out of a game so CK has to score at will. They can’t get into a shootout with Shu. If they do, they’ll lose badly.

This is a huge game for both teams. The Thunder were mercied by the Gators 40-6. They struggled to move the ball and just gave the ball to the Gators at the worst possible times possible. Their defense was on the field all day. The Thunder have got to find consistency on offense. Their still by far the worst scoring team in the league. They average a pathetic 14.5 points. They have to find ways to optimize their talent. One recommendation for the team – stop throwing the deep ball on 1st down!! This is what kill your team. This is the time for them to come together and win this game. If they lose this game, there’s a good chance they will be out of the playoffs. This is as must win as a game as there is for them.

As bad as this team has been all season, this is the game that may solidify their playoff birth. This is also a must win game for this team. Can Anwar pull this team together and beat the Thunder? The only chance they have is with Anwar. He has to keep his team’s defense off the field. Word of advice – make completions and keep that clock ticking. The Renegades struggle mightily on defense. If their defense is off the field, they actually have a good shot at beating the Thunder. Anwar – THIS MUST BE YOUR GAMEPLAN. Anything else would not make any sense.

We have the Jets vs Giants toilet bowl this Sunday and now we have another toilet bowl game on Saturday. The loser of this game will not make the playoffs. This is a very winnable game for both teams. Which team will step up and take a commanding stranglehood on their right to a playoff birth? This should be an entertaining game to watch!

AK continues to dominate as they thrashed the Renegades 54- 26. They’ve now taken over the league as the best scoring team and 3rd best defense. We all know how great this team is. It’s really just a matter of whether or not they can defeat the Browns in the playoffs. This team is healthy and determined to win a chip this year. Sims has put up 43 TDs and 5 picks. That’s just an insane number. He is very likely this year’s MVP.

This team has really come on strong the last 3 weeks. They’ve averaged nearly 35 points per game. It’s impressive how far this team has come after going winless the first few games of the season. They seem to have found good offensive chemistry. They currently have 3 wins and they’re practically a lock for the playoffs. They can also move up in the standings. They will not get the opportunity to move up this week. They’re no where near the level of AK.

This is not really a matchup. AK is just too fast, too athletic and more poised. Look for them to hold the Elites to fewer than 30 points.